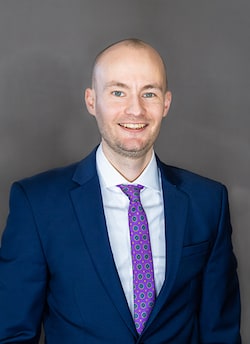 In his short career, Attorney Molloy has proven himself to be a go-to source for clients and colleagues alike regarding people who are injured through no fault of their own. He has represented hundreds of clients with a wide range of injuries. He represents those who suffer minor sprains and strains and he represents the families of people who lost their lives as a result of the negligence of someone else.

Attorney Molloy’s practice focuses on Personal Injury litigation, which includes Car Accidents, Slip & Fall Accidents, and Workers Compensation claims. He has had success in all these areas achieving six figure recoveries for those who were injured on the job, pedestrians hit by cars, and victims of assault.

In the face of insurance companies who don’t fully recognize what his clients are going through, Attorney Molloy is not afraid to push a claim as far as necessary. For example, when an insurance company refused to offer more than $40,000.00 to a client with a permanent back injury, Attorney Molloy successfully arbitrated the case and his client was awarded $172.000.00. When arbitration is not an option, Attorney Molloy is not afraid of going in front of a jury. He has tried several cases to verdict in both District and Superior Courts.

Attorney Molloy has been recognized by the legal and local communities for his success.

Attorney Molloy also volunteers his time to many organizations.

Attorney Molloy is married and has two children. He and his family live in Andover. In what little spare time he has, Attorney Molloy enjoys working on projects around his house. He is also the drummer of a successful cover band that plays functions throughout eastern Massachusetts.

Greater Lowell Bar Association
Board of Directors - 2016 to Present

Honors
Classes & Seminars
Contact Us
Practice Areas
Client Reviews
★★★★★
Marcotte Law firm has since handled a few other things for me not accident related. My experience continues to be fantastic. Perhaps their motto could be simply "No problem. I'll take care of it" because that's exactly what they do. Marguerite Riley
★★★★★
This team is of the utmost prestigious gentlemen I've come across! They handled my son's case as if it were their only. I recommend Marcottte Law Firm to anyone who is in need of an attorney. Robert Vogel
★★★★★
Mr. Marcotte and his staff are courteous and respectful, I've known Mr. Marcotte for over 25 years and I recommend him and his colleagues as the best lawyers in Lowell and Massachusetts area . God Bless them all. Minerva Martinez
★★★★★
Ken was very compassionate, professional and knowledgeable. He kept me informed throughout my case so I felt prepared and comfortable each time I had to appear in court. I would recommend Marcotte Law Firm without hesitation. Ronda Johnson
View More
Submit a Law Firm Client Review