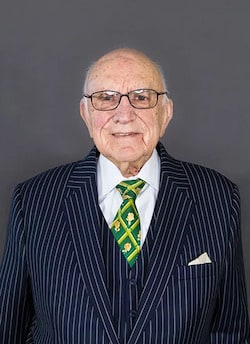 Albert J. Marcotte leaves a legacy of one of the most accomplished attorneys not only in Lowell, but across the Commonwealth of Massachusetts. During his over 60 year career, his unique combination of legal skill, accessibility, relatability, and enthusiasm became a driving force in the legal community. He built his law practice into a top notch firm of skilled attorneys that shared his approach of bringing common sense and legal acumen to every case.

Mr. Marcotte was a lifelong Lowell resident. Born in a cab, as he often claimed, he attended Keith Academy, Boston College and Boston College School of Law. After law school, he served his country in the Army JAG. Upon completion of his military service, Mr. Marcotte returned to Lowell to practice law. At the same time, he also ran his family's taxi and limousine services, often getting up before dawn to get the drivers on the road before putting on a suit and tie to go to court.

As his law practice grew, it became more difficult to run two businesses at the same time. He therefore decided to give up his livery service, which had really been the driver of his bond with his fellow Lowell residents.

Mr. Marcotte quickly became recognized as one of the top lawyers in not only Lowell, but the Commonwealth of Massachusetts. His best talent was an ability to take complex situations, issues, and arguments and boil them down to their essence, making them easily understandable and relatable. This brought consistent success in the District and Superior Courts, predominantly with criminal and personal injury cases.

Mr. Marcotte’s law practice was truly that of a “general practitioner.” It included murder trials and probate cases. His versatility is exemplified in a decision from the Appeals Court that deals with a different legal area than what he typically handled. In what has become a leading appellate decision on ownership of joint bank accounts after the death of one of the owners, he was able to get around the legal title of an account to get back the funds for other beneficiaries of the deceased creator of the account.

Albert Marcotte always took an interest in the legal profession, looking beyond just his own practice. For many years, he served as an officer of the Greater Lowell Bar Association, including a term as president . He fought for many years on statewide issues relating to legal rights for the disadvantaged. He spent a lot of his time with the Massachusetts Academy of Trial Attorneys fighting for the rights of injured people against large companies and insurance companies. He encouraged each one of his lawyers to spend their time in dedication to public service.

Mr. Marcotte’s favorite part of being a lawyer was his relationship with the general public. His clients developed steadfast loyalties to him. Never mistaken for the classic “stuffy” attorney, his skill in communicating which put juries at ease also put at ease the tens of thousands of people that have approached him with legal problems ranging from criminal indictments to severe consequences from faulty medical care. Unlike many lawyers, when Mr. Marcotte explained something, he used language you can understand.

Honors
Contact Us
Practice Areas
Client Reviews
★★★★★
Marcotte Law firm has since handled a few other things for me not accident related. My experience continues to be fantastic. Perhaps their motto could be simply "No problem. I'll take care of it" because that's exactly what they do. Marguerite Riley
★★★★★
This team is of the utmost prestigious gentlemen I've come across! They handled my son's case as if it were their only. I recommend Marcottte Law Firm to anyone who is in need of an attorney. Robert Vogel
★★★★★
Mr. Marcotte and his staff are courteous and respectful, I've known Mr. Marcotte for over 25 years and I recommend him and his colleagues as the best lawyers in Lowell and Massachusetts area . God Bless them all. Minerva Martinez
★★★★★
Ken was very compassionate, professional and knowledgeable. He kept me informed throughout my case so I felt prepared and comfortable each time I had to appear in court. I would recommend Marcotte Law Firm without hesitation. Ronda Johnson
View More
Submit a Law Firm Client Review